With all the talk about bike packing going around, I decided I had to check it out for myself to see what the buzz was all about. I made the decision to bike pack the Coconino 250, a 250-mile mountain bike ride through the Coconino National Forest in northern Arizona. The Coconino was my first bike packing adventure indeed, and an adventure it was. I learned that mountain biking 250 miles on a mix of single track and dirt roads has its own unique set of rules and guidelines, different than any other form of back packing. Carrying everything you need to survive in the wilderness while riding trails on a mountain bike for three to four days is not easy. 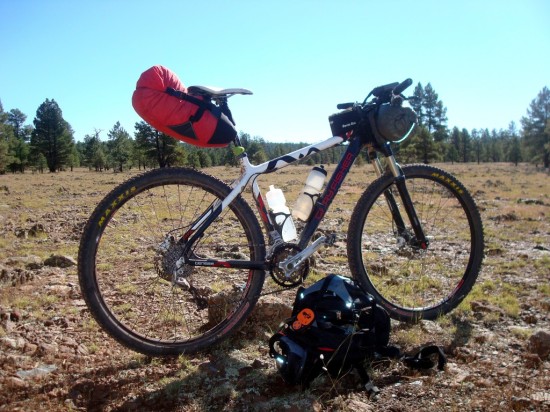 Prior to my trip, I learned a few tips about bike set up from ultra-endurance racers and coaches Lynda Wallenfels and Dave Harris. They both have many ultra-distance bike packing trips under their belt and gave great advice. They advised balancing the weight on the bike between the seat, handlebars, and backpack to make for better handling, especially going downhill. So with their advice in mind, I decided to place my tent and sleeping pad on the handlebars, wrapped in the tent stuff sack, with a seat pack containing my sleeping bag and a few extra pieces of clothing. This worked very well.

On the morning of Friday, October 7, I met up with a few riders who were also riding the Coconino loop. It was a cold morning with snow dusting the ground and still dark, but with a daily forecast in the warmer temps expected, the cold morning air didn’t bother any of us. We all knew we had an experience to remember just ahead. So, at about 6 am on Friday, we left the cars and started riding into the town of Sedona on trail.

View from top of the hill heading into Sedona, AZ at the start

Warm temperatures, in the low 70’s, arrived by the middle of the day. I was riding the Sedona wilderness, with red rock canyons all about, blue skies and flowing trails. Through the first day, we traveled in and out of the red rock formations of Sedona to the west, into the open flats and sandy trails outside of Cottonwood. It didn’t take long to realize that carrying an extra 30 plus pounds of gear and food is going to make for longer days than expected, but that was ok. I was not here to work on speed, I was here to get in a great training ride and experience a different form of cycling.

The goal for the first day was to end with a climb to the top of Mount Mingus, just west of Cottonwood. It was a 10-mile journey from Cottonwood, and almost all uphill. It was truly epic. In a 10-mile span, we ascended from the town of Cottonwood at 3300 feet, to the top of Mount Mingus at 7800 feet in elevation. It was steep and slow going with all the gear, but with one foot in front of the other, I was able to finish it before dark.

As I was cresting the top ridge on the front side of the mountain, about 7000 feet up, the sun was starting to disappear. Near the top, hiking my bike on a narrow steep trail, I was looking at where the trail was taking me. I was climbing up and over a ridge on the front side of the mountain, a ridge that was about 1000 feet below the top. This ridge looked super narrow and razor-like edged while climbing to it and it was a far way from the town below. I had a good feeling cresting this ridge was going to lead to a final ascent up the backside to the top of the mountain, and it did. It was steep traveling and once you crested the front side ridge, there was a narrow trail with eight steep switchbacks that led to the top. Each switchback had unbelievable views, but as the sun was going down, the views were the last thing on my mind. Making it to the top was my first and foremost thought.

Day three was a 70-mile journey from the town of Williams to the town of Flagstaff on a combination of trail and roads. By this time I was sore and tired, but enthused to be riding into the town of Flagstaff. It was a warm sunny day with more great views and flowing trails. I pedaled the entire day alone. I had a GPS route to follow and I made sure I did a good job sticking to it. 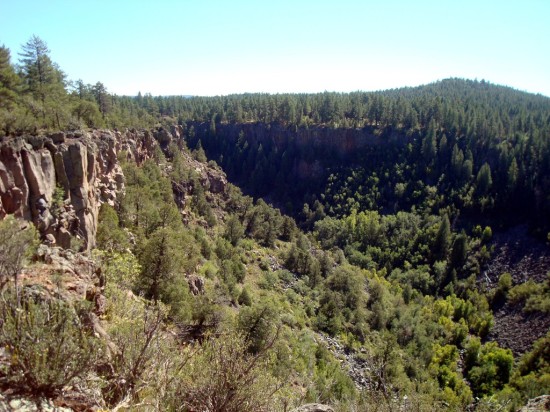 Views from the Sycamore Rim trail

As I emerged from the Sycamore Rim trail on day two and on to the open dirt roads heading east towards Flagstaff, the snow-covered San Francisco peaks appeared over the tree line. This was a welcome view but as close as they looked, they were still a far distance away.

Above – View from the roads after Sycamore trail

I traveled closer and closer to the peaks until I finally arrived at the final ascent of the day, a climb to the base of the peaks to around 9000 feet. After three long days on the bike, I was feeling surprisingly good and having a really good time out there. Maybe the views were covering up the pain in the legs, or the endorphins finally kicked in, but whatever it was, pedaling the final climb of the day was fun. As I traveled through the aspens at the base of the mountain, and into the woods, I then turned onto the Arizona trail to begin my descent back into the town of Flagstaff. This was the beginning of a 14-mile decent back into town, which was well deserved. It was an epic decent on a smooth, fast flowing trail.

At the 200-mile mark, coasting into Flagstaff, I decided to end the trip 50 miles short of the goal due to time concerns and travel. I didn’t realize how long each day was going to take with all the gear. I learned that to be successful with these adventures on bike, you need strong lightweight gear and a strong mind. You must be confident in your gear and yourself to get through a bike packing trip or race. But for my first bike packing trip, I had a great experience, learned a lot about back country travel on a bike and got in some hard-earned fun miles to talk about for a long time to come.